How much etchant is too much? It appears that there can indeed be too much etchant, resulting in, essentially, passivation of the copper layer—not with copper oxide, but with the etching product (CuSO₄ in this case).

Using 15% (NH₄)₂S₂O₈ instead of 30% results in much more robust etching process.

The manufacturer-recommended ammonia persulphate concentration is 250 g of salt in 500 g of water, or 30% by weight. This is a very concentrated solution; a drying droplet of it grows a relatively hard crystallic shell, which can preserve the sludge in the droplet core for a long time.

This is the solution I’ve used initially. It produced very strange results: most of copper on a test board was etched within 10 min, but the rest was not being etched at all. I’ve even tried to scratch it (which normally would induce a rigorous reaction), however it just continued to sit in the very concentrated solution for minutes, with that scratch intact:

While poking that board, I’ve noticed that it has hard white-ish crystals, soluble in water, deposited on the surface. I’ve theorised that these crystals prevented access of etchant to copper very efficiently. To verify, I took a small piece of PCB without any resist and put it into the solution, then took it out when the crystals formed, removed most liquid and dried: 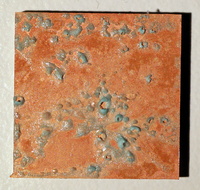 The crystals appear to be light blue CuSO₄·H₂O (I’ve heated them above 110°C while drying). Apart from easily visible blue crystals, the board is also partially covered with glossy film of the same substance, in a pattern reminiscent of the failed test board above.

I’ve etched the board for 22 min at 27°C, and the result is nice and uniform, with all areas being finished at roughly same time. After I took board out of solutions and dried, no big crystals grew on it, though it was covered by a thin film of those. The film likely originated from the thin layer of etchant solution remaining on board. 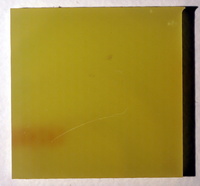 The scratch was me testing how fast copper is being etched.

The same test board etched with the new solution, for about 30 min: 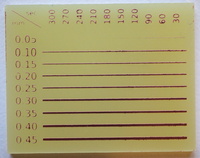