Objective:
find the combination of paper, environment and printer configuration resulting in most faithful reproduction of the original image with least amount of defects and highest toner density.
Result:
use high-quality transparent film (Lomond 0707415 works), verify printer output very rigorously and check which of the “Paper type” settings results in best imprint. No settings appear to affect toner density.

The printer driver handily provides a paper type setting, which includes “Transparencies” as an option. I’ve tried really hard to figure out what exactly does the setting change, to no avail. I’ve read the entire service manual for the printer, but it sadly does not mention anything about that.

My guesses, as there aren’t as much parameters the printer can control:

However, after setting “correct” paper type for printing on PET film, i.e. “Transparencies”, I’ve noticed some odd distortion. I have decided to repeat the job on plain paper, setting the paper type to both “Plain” and “Transparencies”. The results are horrifying:

Have you noticed anything? It’s not immediately obvious to naked eye. 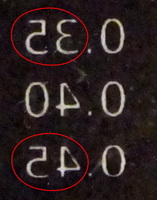 That’s right. When I select “Transparencies”, the printer (or perhaps its driver) distorts the image oddly. It appears as if it duplicated some pixel rows and removed some others. The picture printed with “Plain” setting is reproduced faithfully.

By the way, on actual transparencies the distortion is identical. You may even notice it now in the previous note: 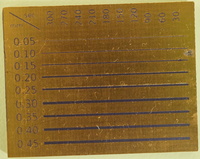 Do you see how the 0.3 mm line is wider than 0.35 mm line? That’s not how millimeters work. I initially assumed it was an exposing-related defect (UV reflecting off copper), but no, that distortion is present in exact same way on the negative I’ve used.

Make sure the transparent film you’re using does not deform while in the laser printer fusor. For example, this is the imprint on “MGChemicals” film left after a few tries:

It is nearly impossible to take a picture of, but if you view the sheet under a sharp angle to a light source, it can be seen that it’s all “wavy”, and, additionally, it has four deep depressions from some internal guiding mechanics of the printer.

Running such a distorted sheet through a laminator with roller temperature of 120°C (which is less than typical fusor temperature of a laser printer) partially fixes the distortion: the sheet still shows the “wavy” pattern, but the depressions from rollers are no longer present.

Printing on such fixed sheet results in somewhat higher quality imprint (fourth on the picture above), but it’s not as good as first one.

Another way to verify quality of your film is to print the exact same pattern on film and on paper: 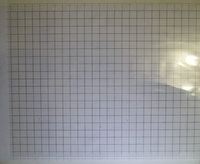 The film and paper are lying with their toner side adjacent to each other. A highly nonlinear distortion can be clearly visible. Of course, it’s not possible to print a high-quality photomaster on such film.

Not satisfied with this, I bought “Lomond” film. It is still deformed slightly by the printer rollers, but that doesn’t at all affect the imprint quality. Also, as evident by the grid test, it has near zero in-plane deformation even after five runs through printer:

I have not found toner density to be affected by paper type or DPI settings. Toner conservation was (obviously) set to “Off” at all times.