In this note I will describe a part of a 50W resonant LC converter that I am designing. The converter will be modular: it will feature a control board with an Ethernet interface, a frontend board with a rectifier/multiplier and a matching network to allow current/voltage readouts, and a power board with the high-voltage transformer, its driver and signal isolation.

This note describes the first revision of the power board.

The immediate goal of the converter is to supply high-voltage, regulated DC for a magnetron sputtering chamber. A more general goal is to learn how to perform instrumentation and process control.

The circuit is as follows (see full design files on Github): 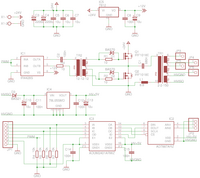 The converter utilizes a half-bridge based on IRF1018E MOSFETs Q1 and Q2, driven using an IRF4428 driver IC2 via a gate drive transformer TR2. The TR2 coils are wound using a 0.03mm² PTFE-coated multistrand wire. The R1 and R2 resistors limit dv/dt. The D1 and D2 diodes increase the speed of gate discharge.

The power transformer TR1 PRI coil is wound using 0.78mm² varnish-covered wire. The TR1 S1 and S2/S3 coils are wound using 0.03mm² PTFE-coated multistrand wire. (In practice, TR1 was wound so that pins 4, 5 and 6 connect to a center-tapped 150-turn coil.) The capacitor C1 and inductor L1 provide the resonant circuit.

The power board provides galvanic isolation using an ADuM2401 digital isolator IC3, which is convenient for isolating a single IC with an SPI interface. The instrumentation is performed with an AD7887 12-bit SAR ADC IC2. The entire isolated section is powered from the power transformer secondary S1 rectified via D3 and stabilized using a 78L05 regulator IC4.

The connector JP1 is the interface for the control board. It provides the isolated SPI interface to the ADC and the frequency input.

The design turned out remarkably well. There are a few amends I would do:

There are three main layout considerations for this board:

The layout is as follows:

The transformer driver layout is faultless.

Failures important for the design turned out to be:

Failures whose importance is not clear turned out to be:

Unimportant failures turned out to be:

A simple testing rig was assembled using an Iteadmaple and Color LCD shield. The firmware is available on Github.

The firmware currently includes a frequency generator with 1/72MHz pulse width resolution and ADC readout with averaging. The ADC readout is performed in phase lock with the frequency output so as to avoid switching at the same time as ADC sampling.

The Maple to power board connection map is as follows:

The firmware offers a simple UI:

The board was stress-tested by continuously powering an arc at 90W for an hour while cooling the board with forced air. There were no malfunctions.

The actual operating environment (a low pressure glow discharge) would be substantially less harsh and noisy; however, this test both provides an upper bound on performance and demonstrates behavior during a failure that arcing would be.

Preliminary specification determined that ADC noise during arcing, after averaging 32 samples, amounts to about 4 bits out of 12. This is not satisfying.

It turns out that using an alligator clip with an oscilloscope probe in a noisy environment leads to acquiring completely worthless data. For instance, I’ve seen 20+V ripple on ADC power rails whereas the real value is under 1V. Using a spring ground clip instead leads to much better results.

A more extensive testing has to be performed to determine performance with a specific frontend; I will start with a simple rectifier frontend. No switching waveforms are provided so far, as the only testing done so far was done with an arc, which is neither a typical nor useful load.

The board will probably have to be respun to obtain better ADC performance.

The power dissipation on the inductor is annoying, but acceptable with forced air cooling.