I’ve designed a circuit with, among other things, an integrated buck converter (Wurth 171050601), which has an exposed pad. While the rest of SMT devices on the PCB can be easily soldered with an iron, this IC posed a problem, since the exposed pad is completely inaccessible.

I didn’t have an SMD rework station, or a hot air gun, or a hot plate, or a stove and a skillet (just moved ~8000km, come on). But I did have a blowtorch, so I decided to figure out if that can be used for reflow.

I’ll begin with a word about the torch. It’s Bernzomatic TS8000 running on MAP/Pro (propylene), a true monster of handheld combustion that can get a 1/4” pipe to red-hot in a few seconds: 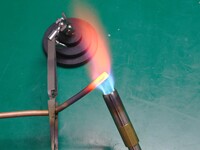 Naturally, I expected that damaging the board would be pretty easy. However, that proved to be not the case.

It could be seen that the entire board is heated quite evenly, both by measuring its temperature with a handheld IR thermometer, and visually by looking at the solder mask; the red solder mask on this board (DirtyPCBs batch circa 2016-04-25) is significantly thermochromic, going from “arterial blood” to “venous blood” when heated from room temperature to 200°C.

Then, I did the same with the actual component I needed, in isolation, in case I overheat it:

The result is practically perfect, and certainly there is not even minor delamination:

Something to note is that torch exhaust contains a substantial amount of water vapor, which readily condenses on cold areas of the PCB.